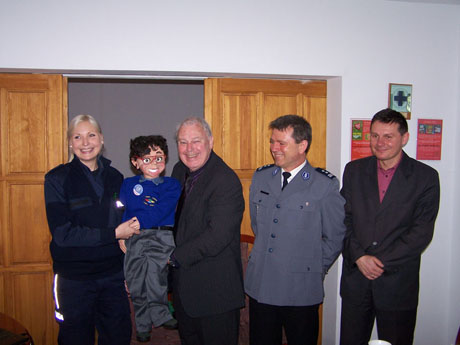 In 1992, after the well-documented James Bulger affair and the subsequent comments from both the Government and the media as to what the Church in Britain could do about the safeguarding of our young people, Christian Family Ministries Trust / Lamp productions Director, Rev Peter Green, decide to respond to these pleas.

Rather than try to set up a new initiative in this area, Peter though it would be better to make contact with those who were already responding to these concerns. A friend and former colleague, John Kidd, who worked for the Probation Service, put Peter in touch with the Police Schools Liaison Department. After some initial attempts to see if joint efforts at working together with young people were possible, both Peter and the Police were thrilled with the success of the Programme. This resulted in a request for Peter to train around 200 new School Liaison Officers at Tally Ho Training Centre. In addition, the response from the schools was almost overwhelming!

The media [Birmingham Post and Mail, local Television Stations], soon heard about the successful partnership and were quick to testify to the effectiveness of this inter-agency approach.

By introducing these subjects in an Assembly situation, it is also possible to include an additional multi-faith application. This helps schools fulfil their legal obligations under the Education Acts. It was particularly gratifying recently, to receive very encouraging responses from multi-ethnic schools in the Alum Rock and Washwood Heath areas of Birmingham.

The success so far has been far beyond the original expectations, and we could not foresee what repercussions would occur nationwide. Rev Peter received invitations to visit other schools around the country, as far apart as Leeds, Liverpool, London, Fleetwood, Sussex and Avon.