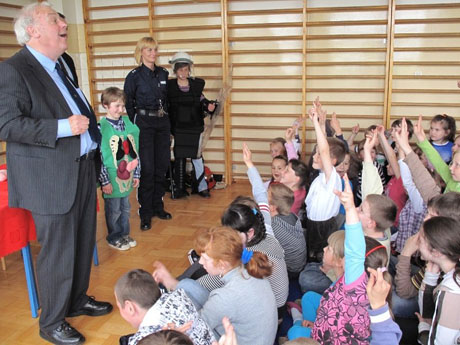 Once the programmes were launched on DVD format, their use expanded throughout the west Midlands, and even to other Forces, including Leicestershire. We also had a request for the programme from the Ministry of Defence Police in connection with Officers families at Stirling Lines [SAS] Hereford Garrison.

Although designed for use in Britain, while Peter was working with young people in Poland in 2001, Przemek Nadolski, the Chief Police Spokesman, requested to view the programme. After a subsequent meeting with key representatives from the Police, Education Department and Local Government Officials, the Alfred Programme was adopted as a Official Police/School Programme for the Promeranian Voivodeship to be run from the County Police headquarters in Szczecin. The Polish Government [Department of Public Safety] paid for the programmes to be dubbed into Polish. We also gave permission to Pomerania.tv to broadcast the programmes free of charge via cable and the internet TV.

In 2008, Rev Peter Green, author of the Programme, received the 'Heart to Heart' award in Szczecin. An annual award given to an outside person or organisation that has provided the most significant help to schools.

After a further visit to Poland at the request of Pomeranian International Police Cooperation Department, during which Superintendent Tim Godwin [Professional Standards Dept., Lloyd House] was present, the Chief Commander of Police, Tadeusz Pawlaczyk, became the Oficial Patron of the Programme for Poland.

Through their use of the Programme, Polish Officers together with Education Officials have produced an excellent handbook for Police Officers and Teachers, which contains extra materials, diagrams, artwork and new ideas for how to run the Programme. This is included with the DVD set.